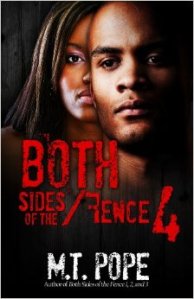 Chaos and drama is synonymous with the blood that runs through their vein. James Parks’ thriving bloodline. Ashley and Alex Black, have transitioned back to Baltimore living and the drama they thought was over continues to plague them.

Ashley is hard at work in her career and is enjoying her new life. But an old flame comes back into the picture and wants to play for keeps. Throw in her boyfriend, Braxton, with his own secrets, and the drama explodes.

Alex is a Sports Agent and a party animal with a libido to match. When he stumbles onto a client with a secret he has to make a decision: do the right thing or cash in Toss in a sneaky and relentless stalker named Jasmine and Alex finds himself in more drama then he can handle.

New and old drama collides in this continuing saga of the Black family. Someone wants revenge and is waiting to rid the world of some bad blood. Will Alex and Ashley survive another round of drama?