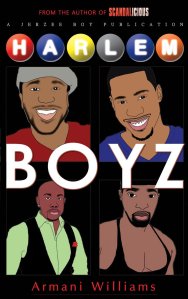 Question: Why did you write “Harlem Boyz?”

Answer: You want the real? I saw a lot of projects coming out about black gay men. But a lot of it was the same kind of thing. Either the men were on the down low or they were very queeny acting gays with alot of attitude. I’ve also noticed in the gay community that kind of catty, mean spirited behavior is often praised and laughed about. I hate that kind of behavior. So I wanted to write about a group of gay men who were men. Men who act like men do exist in the gay community. I was tired of not seeing myself or my friends reflected in that. Now yes I explored the DL themes in my first book “Scandalicious” but it was his evolution from DL to fully out gay man. Furthermore, I wanted people to see that gays aren’t much different from straight people. We work, have careers, love hard, get our hearts broken, and have deep friendships and family ties as well. You’d be surprised how ignorant people can be when it comes to gays. As if we’re from another planet and want to convert everyone to our side. That’s not the case at all. We just one to be treated like human beings and be allowed to be. And when people get into reading “Harlem Boyz” they tend to forget the characters are gay. They just see them as people. And that’s what I wanted to accomplish.