Malcolm Campbell is the director of a south Los Angeles organization focused on mentoring gay youth, and his nineteen-year-old nephew, Blake, is being sent to stay with him for the summer. Malcolm has always been a community and family role model everyone looks up to. But he also has a secret he never knew he had… until it pops up on the Internet.

Across town, in the closed and closeted world of Black Hollywood celebrity, pro-basketball player Tyrell Kincaid and R&B singer Tommie Jordan are public heroes in a very private relationship. After a series of indiscretions and slipups, the relationship becomes fodder for speculation and outing by the paparazzi and nationally-known gossip reporter Livonia Birmingham.

Despite living in two different worlds in L.A., Malcolm, Blake, Tommie, and Tyrell find themselves in the same arena, where they’ll have to risk it all to protect their hearts and their destiny.
Release:1/19/15
Click the Cover to Purchase. 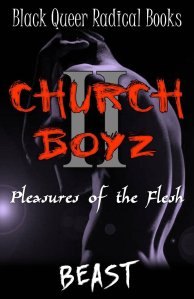 Church Boyz II: Pleasures of the Flesh by:Beast
Isaiah’s newly discovered need for male companionship sends him down a path that forces him to question his engagement to Tasha. His lust reveals a base nature he’d only felt during his adolescence during times of weakness. Skeletons from Micah’s past come to haunt him as he continues to aimlessly wander through life. Being a hardcore rebel is no longer an option when the very thing that broke him down stares him in the face. Micah’s love affair literally blows up in his face. He’s left exposed but he’s not the only one. The sons of Deacon Williams have feasted on the pleasures of the flesh and will soon know the bitter taste of judgment.
Release: 1/20/15
Click the Cover to Purchase.

Thug D by:Tyson Anthony
For most of his adult life Maxim has dated Eddie. After an unexpected break up Maxim finds himself abandoned, lost, and broken in a sketchy neighborhood. He’s rescued by Dee, his thug in shining armor. Maxim finds himself a single man and free to explore his sex life and decides to start with nine solid inches of Thug D.
Release: 1/25/15
Click the Cover to Purchase.

Prison Politics 4: Blood In, Blood Out by:BEAST
Correctional Officer Xavier Brown has been on administrative leave pending a psyche evaluation. The time and distance from his prison crush has changed the man. He longer yearns for the days where he can count his days behind a cubicle. His heart, along with another muscle, craves a reunion with Raheem. The dope dealing prisoner has a hold on him that the guard just can’t shake. But in his absence, things in the prison have changed. The much needed reunion may not be as pleasurable as Xavier hopes. New obstacles stand in his way. How far will Xavier go to protect the man who awakened illicit desires in his heart?
Release: 1/25/15
Click the Cover to Purchase.