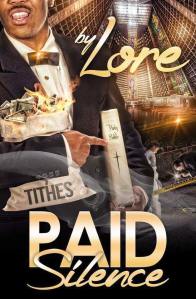 Paid Silence by:Lore
Bishop Jefferson Sharpe has every worldly possession he has ever prayed for, a beautiful and supportive wife, well-mannered children, a mansion, a private jet, and all of the cars he’s ever wanted. Just as most families aren’t without sin, the Sharpe’s aren’t any different, and the ringleader is the head of the household; Jefferson Sharpe. Jefferson is doing his dirt in the dark and if brought to light he could lose everything he’s worked so hard to obtain.

For all that is secret will eventually be brought into the open, and everything that is concealed will be brought to light and made known to all. Luke 8:17

Damon is an O.G. who is no stranger to the streets. He’s going through it financially. Everything is tight for him, but when he reconnects with his old friend Jefferson, he’s hired as his trusted assistant. Damon gets greedy when he is exposed to the good life and no amount of money will satisfy his hunger.
Release: 5/18/15
Click the Cover to Purchase. 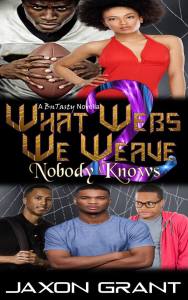 What Webs We Weave 2: Nobody Knows by: Jaxon Grant
Things are only heating up after Qier’s earth-shattering hit knocked his teammate out. Qier is destined to protect his family at all costs. Oier’s loyalty to his family and friends is unmatched, but will he be loyal enough to reveal his secret to the people he loves the most? In the midst of all the drama in his life, an unexpected character throws Qier a curveball. Is Qier being set up or is someone being shady? What will Qier do?

Could Keston’s desire to have relationships like his best friends finally be in his reach? One chance encounter at a bus stop could change everything for him. Could this be the love Keston’s been yearning for?

Raheim’s and lzzy’s friendship is taking a turn for the worst. Both are holding on to secrets that could easily destroy lives. What are the two friends hiding from each other? Will they be able to repair what’s broken?

Phoenix wants to settle down and he thinks he;s found that dude. The only issue is Phoenix’s current boyfriend. In addition to Phoenix’s love life stressing him, his past is haunting him. What really happened in Mississippi? What is he running from? Why is he really in Orlando?

In the second entry of a nine-book short story series, the web of intricate secrets, lies and jealously continue to tangle, but Qier’s unbelievable dark secret is destine to turn your world upside down. Just remember–everything isn’t always as it seems.
Release: 5/19/15
Click the Cover to Purchase.